Infants (from birth):Empty the contents of 1 capsule and mix with breast milk, formula or water once daily to support baby’s gut flora..

LGG® is a registered trademark of Chr. Hansen A/S.

Assists behavioural complaints in later childhood (when taken during pregnancy and infancy). In a 2015 randomised trial, 159 mother-baby pairs were given 10 billion LGG® daily prenatally and until the age of six months. At the age of 13 years, no children in the LGG® group had developed behavioural complaints, compared to 17% of the control group.6 In addition, the study also measured the level of bifidobacterium species bacteria which was significantly lower in affected children. The regulation of emotional behaviour and the central GABAergic system may be via the vagus nerve (gut-brain axis).7

20 billion LGG® has demonstrated benefits for childhood atopy and immune development.8 LGG® is well known with multiple randomised trials showing a reduction in atopy (allergy and eczema) when taken in the last trimester and during infancy.9,10,11 LGG® has a substantial body of evidence confirming efficacy at a dose of 20 billion per day in the last trimester and throughout breastfeeding, or 10 billion when given direct to infants.12 The mechanism is understood to be an increase in transforming anti-inflammatory growth factor (TGF-β2) in breast milk. TGF-β2 is a key immunoregulatory anti-inflammatory factor that inhibits IgE synthesis.13

Up to 10% of pregnant women experience glucose transport problems.14 In late pregnancy, increases in serum insulin are often accompanied by insulin resistance. A 2009 randomised controlled trial demonstrated that a combination of 10 billion CFU of each strain (BB- 12® and LGG®) assists maternal glucose metabolism when taken during pregnancy.15 In 2011, LGG® and BB-12® (alongside dietary counselling) were also demonstrated to help reduce the occurrence of central weight gain following childbirth.16

Promotes the growth of infant commensal flora populations. Commensal microbiota colonisation is initiated by contact with vaginal microflora during birth, and matures under breast milk and environmental influences. LGG®, when given to infants, enhances the relative levels of key bifidobacterium, including B. breve.17 B. longum (BB536) and B. breve (M-16v) are both human residential bacterial strains that have a modulating action on the gut microbiota of pregnant women and their infants.18 A dose of 10 billion B. longum (BB536) can help to establish a healthy intestinal microbiota in early life and improve T helper 1 (Th1) immune response.19 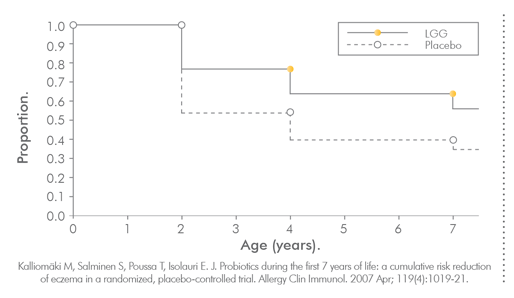 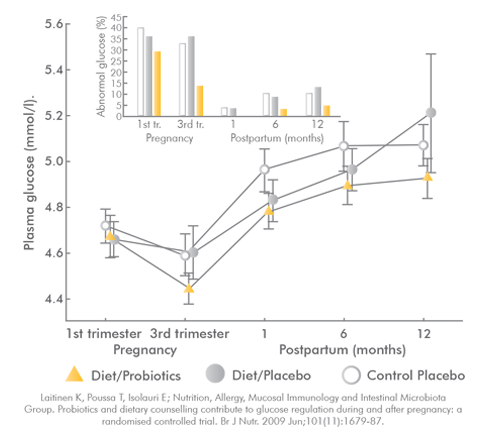 LGG® is a registered trademark of Chr. Hansen A/S.